Nature giveth and nature taketh away. Following the 2012 harvest, considered by most Finger Lakes vintners to be the best in recent memory, 2013 proved a challenge. The growing season was marked by wet and humid weather, which created higher-than-usual disease pressures and placed a premium on careful viticulture.

"2013 was warm and wet," says Paul Brock, who, along with his wife, Shannon, is owner and winemaker of Silver Thread winery, on Seneca Lake. "I worked in 11 different Riesling vineyards across the region and I saw nearly perfectly clean fruit and nearly devastated fruit [to rot]."

Luckily, the difficult growing season was offset by a warm, dry September, which helped freshen the vineyards and ripen grapes, particularly aromatic whites and other earlier-ripening varieties. Later-ripening grapes and most reds still struggled, as the weather broke down again in October.

Since last year's report ("Riesling Succeeds in 2012," Jan. 31 - Feb. 28, 2014), I have blind-tasted 265 wines from New York's Finger Lakes region. Of these, 14 earned outstanding ratings of 90 points or better on Wine Spectator's 100-point scale, while 215 (more than 80 percent) earned a very good 85 points or higher. Riesling, the region's leading vinifera variety, dominates the offerings here, with 121 wines. Wines from the 2013 vintage, now being released, account for 76 bottlings in this report. (A free alphabetical list of scores and prices for all wines tasted is available.)

Growers noted that terroir is becoming more pronounced in an increasing number of single-vineyard bottlings. Keuka Lake Vineyards, Atwater Estate and Red Tail Ridge produced notable examples of site-specific Rieslings in 2013. These single-vineyard bottlings show a distinctive range of slate, peach, jasmine and floral notes, but production remains limited. In contrast, wines produced from a blend of vineyard sources, including the Forge Riesling Finger Lakes Dry 2013 (89, $24) and Ravines Riesling Finger Lakes Dry 2013 (89, $17), are more accessible and easier to find. Some top producers, including Hermann J. Wiemer and Red Newt Cellars, have not yet released their 2013s.

Because 2013 will require some sifting to find quality, consumers interested in trying Finger Lakes wines might be best served by grabbing any remaining 2012s. The vintage was drier and more consistent overall. The highest-scoring wines in this report are late-releases from 2012, including the Hermann J. Wiemer Riesling Seneca Lake Dry HJW Vineyard 2012 (92, $39) and Forge Riesling Finger Lakes Les Alliés 2012 (92, $26).

Senior editor James Molesworth has been with Wine Spectator since 1997.

The New York Wine & Grape Foundation is a not-for-profit corporation promoting all wineries and grape-growers in New York State. The Foundation's strategic goal is to have the New York grape and wine industry recognized as a world leader in quality, productivity, and social responsibility. New York ranks third in wide production nation-wide and the wine industry contributes $4.8 billion annually to the state's economy. 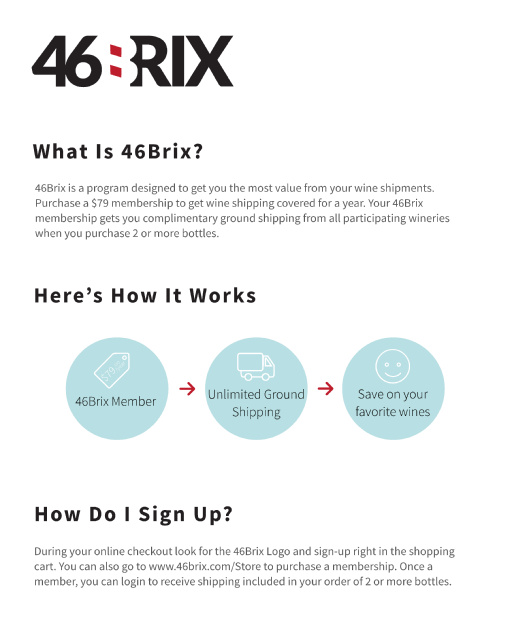 46Brix is a unique membership program for wine lovers powered by WineDirect and Vin65.  Members enjoy exclusive shipping benefits from the hand picked selection of premium and sought after wineries.

$0 Shipping on hundreds of wines.
Access to over 29+ wineries - and the list keeps growing!
Order as many times as you like - from as many wineries as you like.
Support your favorite vintners by shopping direct from the winery.

With 46Brix, the more you spend the more value you get from your 46Brix membership!  An annual fee of just $79 covers ground shipping on all orders of two or more bottles, no matter how many purchases you make. 46Brix saves you time and money. Shipping wine can be expensive (unfortunately wine is heavy). This is a great way to stock up without incurring large shipping fees with each purchase.

All you need to do is select 46Brix when checking out. It's that easy!

To enroll, simply purchase the $79 annual membership below .
Shop any of the participating wineries.