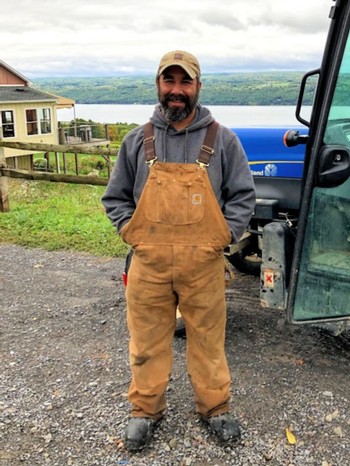 Chris’s interest in winemaking began with a simple wine kit. While he calls the first batch of wine he made only “entirely tolerable,” he fell in love with the processes. After college he was fortunate to become the assistant winemaker at Castel Grisch Winery, where he spent about half of his time in the winery and half in the vineyard, and there, he realized he loved the growing process even more.

His first vineyard management position was with Standing Stone Winery, where he worked with exceptional consultants. He next moved to Hazlitt 1852 Vineyards where he helped to install and refine techniques for managing some of the first Scott Henry trellis systems in the Finger Lakes, which are now commonly used in many premium wine grape vineyards. His next position was at Sawmill Creek Vineyards, one of the premier sites in the Finger Lakes, where he was responsible for running the trellis and canopy management team.

From there, Chris was hired to manage Knapp Vineyards. Over ten years, in addition to managing Knapp, his responsibilities grew to include Varick Winery, Welliver Vineyards, and Chateau Lafayette Reneau. In all, he was responsible for approximately 120 acres of vineyards. His final stop before Atwater was Hermann J. Wiemer Vineyards and Standing Stone Vineyards. As Director of Vineyard Operations, he oversaw 140 acres spread across both sides of Seneca Lake and five sites. At Atwater, he is excited to returning to a hands-on approach to growing super premium grapes on one of the most exceptional sites in the Finger Lakes were it is a privilege to work at such a beautiful site with the potential to grow amazing fruit and gratifying to set up vineyards like these for the future so that they can continue to thrive.

His grape growing philosophy centers on balanced vines and balanced vineyards, which he believes is the foundation for crafting the highest quality wines. Chris focuses on thorough and thoughtful canopy management and efficiency with a goal to balance perfectionism and a minimalist philosophy. He evaluates each input is evaluated for its merits and cost from both an economic and environmental standpoint. Being a good steward of the land is foundational to being an excellent grape grower.

As a native of the Finger Lakes, Chris has taken great pleasure in watching our area develop into a world-class wine growing region, and he looks forward to being part of the continued growth and success of our industry. He is married to his high school sweetheart, and they currently live their two sons in Hector on fifty acres off-the-grid surrounded by Finger Lakes National Forest. They have two dogs, a cat, a horse, chickens, and honeybees.