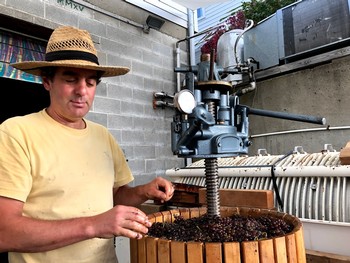 Vinny Aliperti has been winemaking for over twenty years. Starting out in the Hamptons of Long Island, he apprenticed for three vintages (1997-1999) at Wolffer Estate under long-time winemaker Roman Roth, primarily producing Chardonnay and Merlot. In early 2000, Vinny moved with his family to the Finger Lakes to work at the legendary Hermann J. Wiemer Vineyard, where he first learned Riesling production. In 2001 Vinny joined the then startup Atwater Estate Vineyards, where he continues today heading up winemaking operations. With the blessing of Ted Marks, owner of Atwater, Vinny and his wife Kim embarked on their own wine journey in 2007 when they founded Billsboro Winery in Geneva, NY, 2016 winner of the NY Wine & Food Classic Governor's Cup for its 2015 Syrah.

Vinny has demonstrated a consistent history of superlative winemaking. While the idea of process may not sound too romantic, it forms the architecture behind every wine Vinny produces. From bud break to bottling and the thousands of decisions in between, his focus is to retain the integrity and character of each press load and allow the future wine the opportunity to develop to its fullest potential. Through careful planning and devoted vigilance, the dance between nurturing the wine’s path and allowing its natural tendencies to shine through are inextricably tied to the wine’s outcome. In the end, it’s his intent to bring forth dynamic, fruit forward wines, full of life and intensity while celebrating the vagaries of each Finger Lakes vintage. Vinny’s approach has earned him praise both locally and nationally, including several write-ups in Wine Spectator, The Washington Post, Wine and Spirits, Wine Enthusiast, and the New York Cork Report.