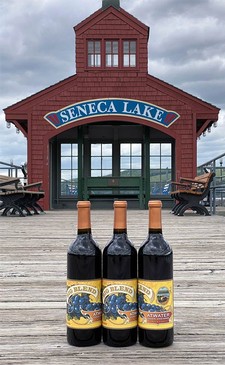 Our winemakers, Vinny and George, have curated a special set of wines from our library: a limited edition 2011, 2012, and 2013 Big Blend vertical. The blend of vinifera grapes in this non-traditional “Super Seneca” changes from year to year, and this vertical bundle gives insight into how both the growing season and the winemakers’ choices affect the characteristics of the wine. These vintages come from our library and are only available through this offer, with just twenty (20) three-packs available. Add this special set to your collection today and join us on Thursday, July 23 at 5:30 pm ET for a virtual tasting.

To celebrate the release of this special collection, we are hosting an exclusive virtual tasting with George on Thursday, July 23, at 5:30 p.m. ET as he discusses this blend and highlights the characteristics of each of the 2011 through 2013 vintages and how the growing season impacted the flavor each year. You will also have a chance to ask any questions you have about the grapes or wine in this interactive event.

The virtual tasting is free but we ask you to PRE-REGISTER.

The 2011 growing season started with a rainy April and May, but by June, warm, dry weather dominated. As the first rains arrived in August, they came as a relief, helping vines recover. But the rains continued persistently through September and the vineyards could not dry out. The abundant crop yields had lower brix and moderate acid.

Uncharacteristically warm temperatures in early March initiated premature bud break. April followed with a series of severe frosts that caused almost total loss to the region’s apple crop, but our vineyards survived with little damage. Rain was scarce through mid-July, and the heat index was higher than average for the third year in a row. We avoided drought, and the lower than average rainfall decreased disease pressure. Harvest began and ended about three weeks earlier than normal with overall lower yields and excellent quality.

The growing season in the Finger Lakes has been near average in number of growing degree days. We managed to avoid any significant spring frost. Heavy spring rains continued into June, while July was hot and humid with temperatures reaching the triple digits. Through early August, though, the relatively dry weather had vineyards thriving. An inch of rain on Labor Day turned up the disease pressure but a spectacular September stayed dry and sunny for most of the month and kept many of these early afflictions from being troublesome.