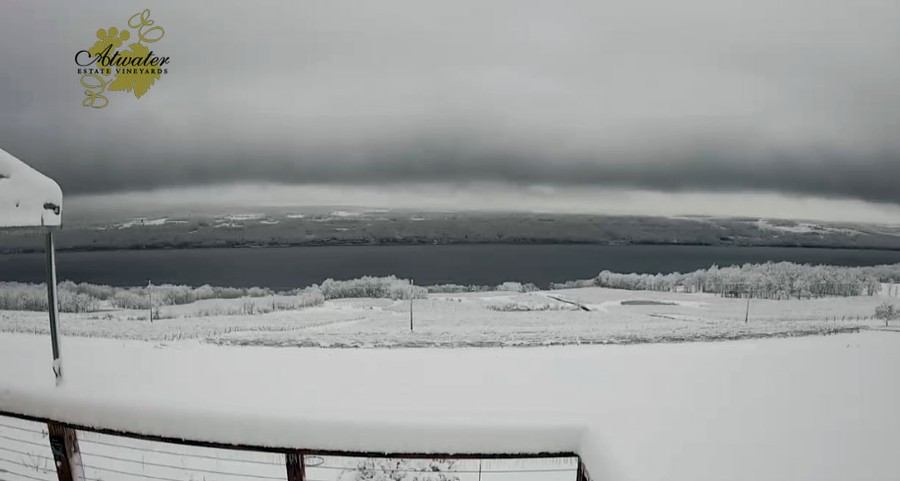 On December 2nd, the first snow of the season blanketed our vineyards. Be sure to tune in to our LIVE webcam to watch the winter weather. 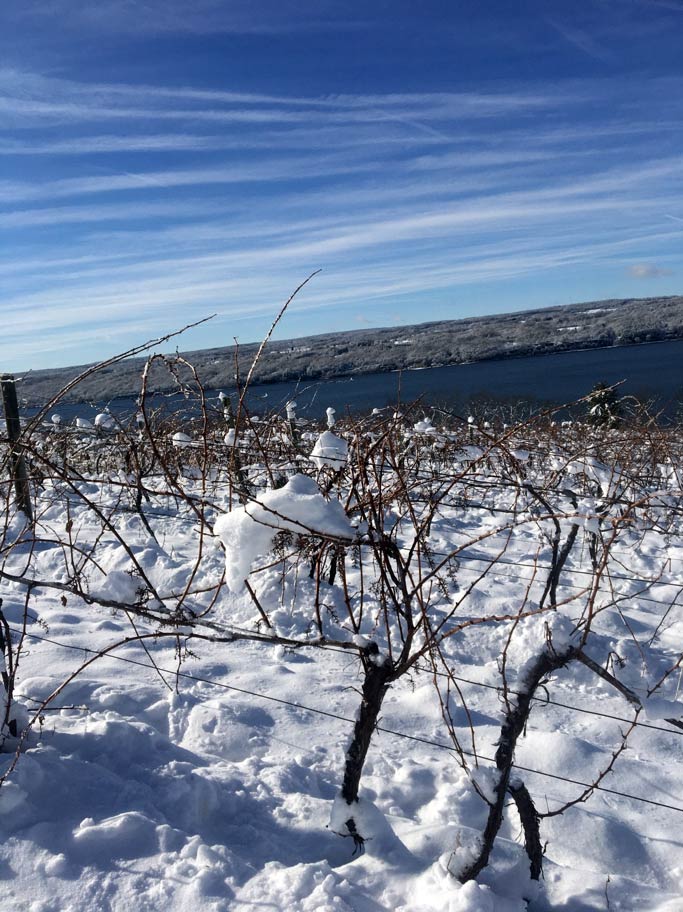 The vineyard staff is working on our post and trellis repairs and moving catch wire clips before the ground freezes. Our typical trellis setup consists of six wires—two “fruit wires” and four “catch wires.” Fruiting canes (the branches that grow from the main trunk) are tied to the fruit wires in the spring before bud break while moveable catch wires support the growth of leaves and shoots. Since vines can grow quickly, we must ensure a proper setup so we move quickly and efficiently throughout the season.

We’ve also just received our yearly soil tests results so that we can tailor our treatments for each block as we spread mulch and fertilizer to continue to keep our soils healthy and productive.

The 2019 harvest is officially in and early reports are quite favorable thanks in part to cooler nighttime temperatures which kept disease pressure low and for mostly dry conditions during September and October. Alcoholic fermentations this season are winding down for the most part with the exception of a few late harvest Riesling lots that are still ticking away. Our reds are finishing up malolactic fermentation in the barrel hall and will soon begin their winter hibernation. In the next stage, we will begin looking at each of the early new release wines to assess whether they need any corrective intervention, which usually involves a series of blending bench trials to determine how best to finish the wine—one of the best parts of the winemakers’ jobs!

This month, George and Matteo also bottled the Pétillant Naturel 2019 (photo above) which has a very narrow window for bottling when the wine is at the appropriate sugar level.

From the Tasting Room 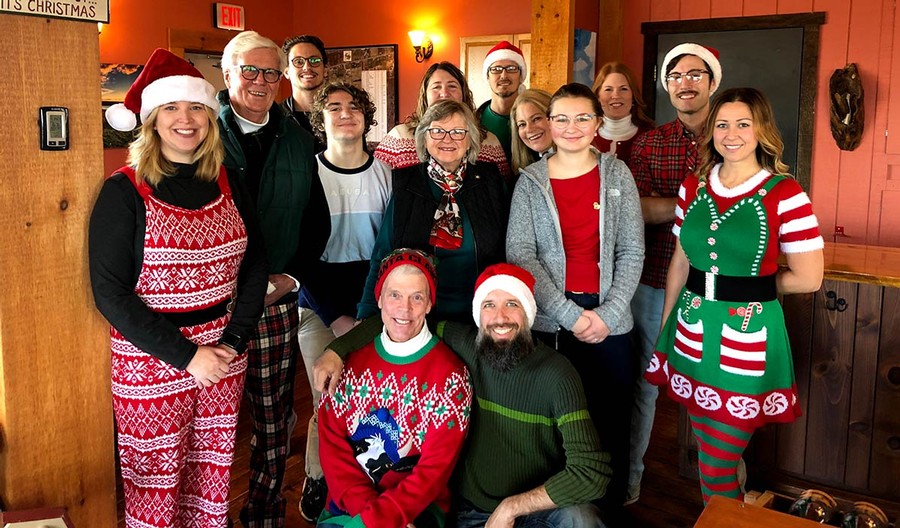 Around 5,000 guests, including Santa, Ms. Claus, reindeer, the ghost of Christmas past, and merry elves visited Atwater over two weekends for Deck the Halls, the popular Seneca Wine Trail event that sells out every year. Atwater’s Santa’s helpers served Riesling 2015 paired with a tamarind/apple butter chutney on samosas.

During the three-day event, revelers received a wreath and souvenir wine glass, and at every participating winery they visited, they got a special ornament and wine and food pairing. Visit Seneca Lake Wine Trail for information about 2020 tickets.

You can view all of our upcoming events on our events calendar.

Who Makes Your Wine? Wes Andrew 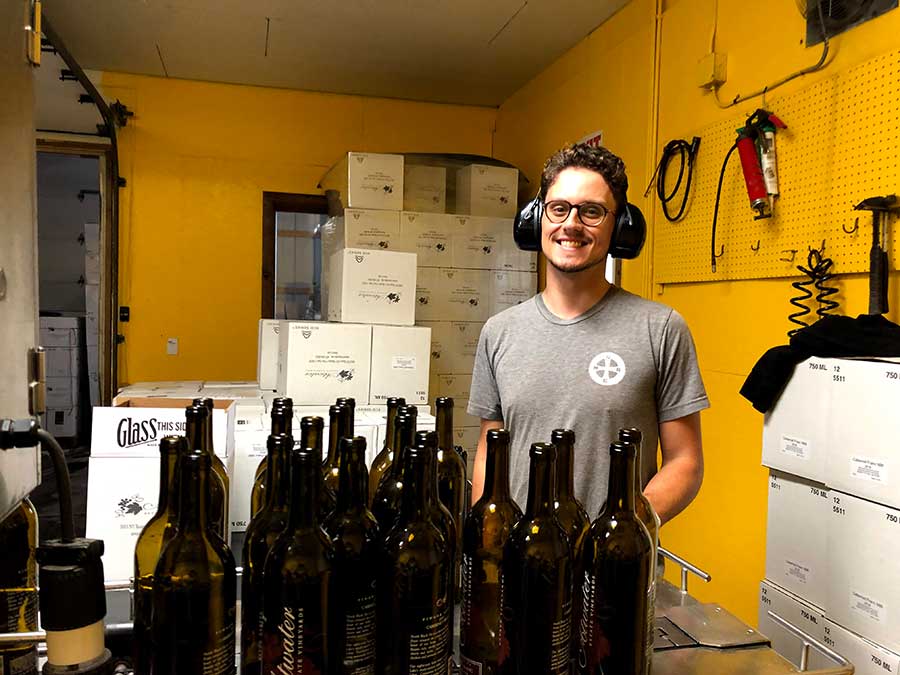 Our 2019 Harvest Assistant, Wes Andrew, currently attends Finger Lakes Community College for an A.A.S. in Viticulture & Wine Technology. His early experiences with wine and grapes started in his aunt and uncle's vineyard in the Shawnee Hills AVA in Illinois. Although the wine industry had always been of interest, he didn't consider pursuing a career in the industry until he spent a summer working for Blue Sky Vineyard in Illinois and decided that he wanted to pursue education in the field. He was interested in the Finger Lakes, and the FLCC program seemed like a good fit. After graduation, he'd like to explore the wine regions in Oregon and Washington. While Wes don't yet know where he'll settle down, his long-term goal is to own his own winery and vineyard.

Wes likes how interconnected everyone is at Atwater. Since it's a small place, everybody knows each other which is a nice feeling. Besides learning practical knowledge from Vinny and George, Wes says that while it may sound odd, he really enjoys power washing the floor. There's something very satisfying about watching the dirt and grime get blasted away and seeing the stark contrast between the unwashed and washed floor. 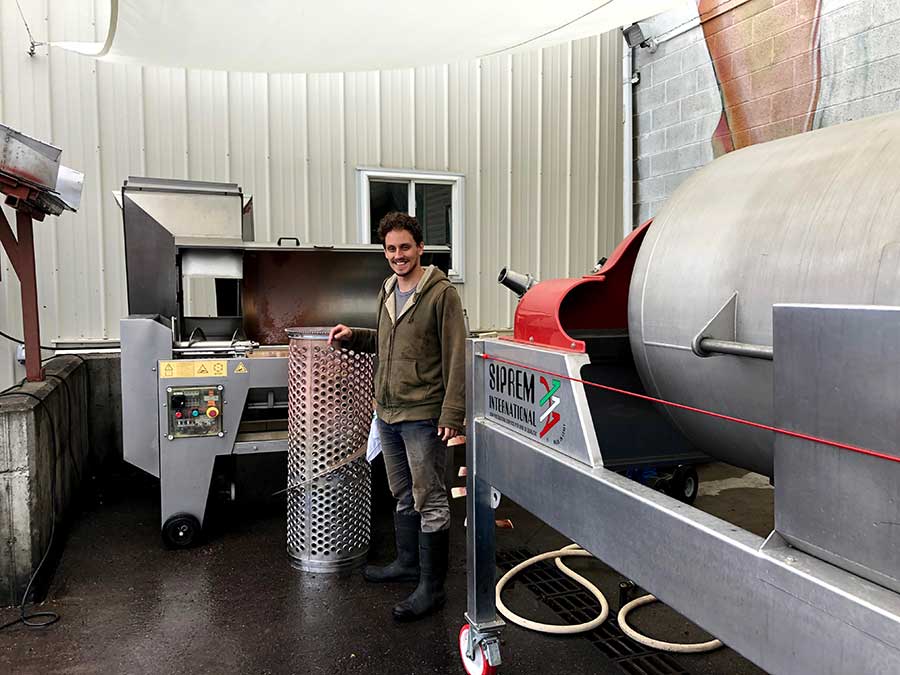 Wes was surprised by the amount of non-"wine" knowledge you need to know as a winemaker. On top of knowing how to make the wine, you also need to be an electrician, plumber, and a mechanic. So many things could go wrong: the press could stop working, something could go wrong with the glycol plumbing, the forklift could break, the list goes on and on, and you need to be ready to fix anything and everything if you have to.

Previously, Wes was enrolled in a B.S in Music Performance, his instrument being the double bass, but he decided not to pursue music as a full time career. However, he still plays almost everyday and has no plans of stopping anytime soon. He's hoping to find an orchestra to perform with once he has a more consistent schedule and is done with school. He's also a big road biker! Wes loves to ride his bike both casually and competitively in regional races and events. He tries to put in at least 100 miles a week either on the road or on the trainer when the weather is bad. He also enjoys cooking, and his favorite cuisines are from Asia, specifically Korean, Thai, and Szechuan. He cooks every day, and sometimes twice if he's home for lunch. He thinks there's  something magical about chopping up all of the ingredients and slaving over a hot stove in order to put together a delicious dish. His favorite thing about cooking is that you're always rewarded for your hard work.

Atwater is proud to recruit many of our interns, including Wes, from the FLCC Viticulture & Wine Technology program. We've enjoyed working with Wes this season, and wish him the best as he finishes his degree and embarks on what we're sure will be a successful career! 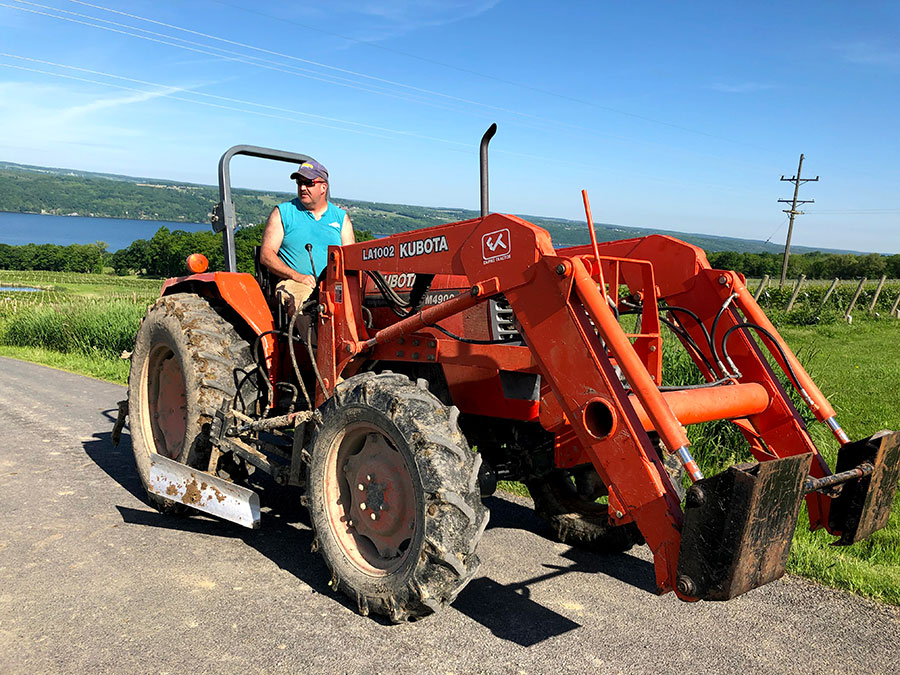 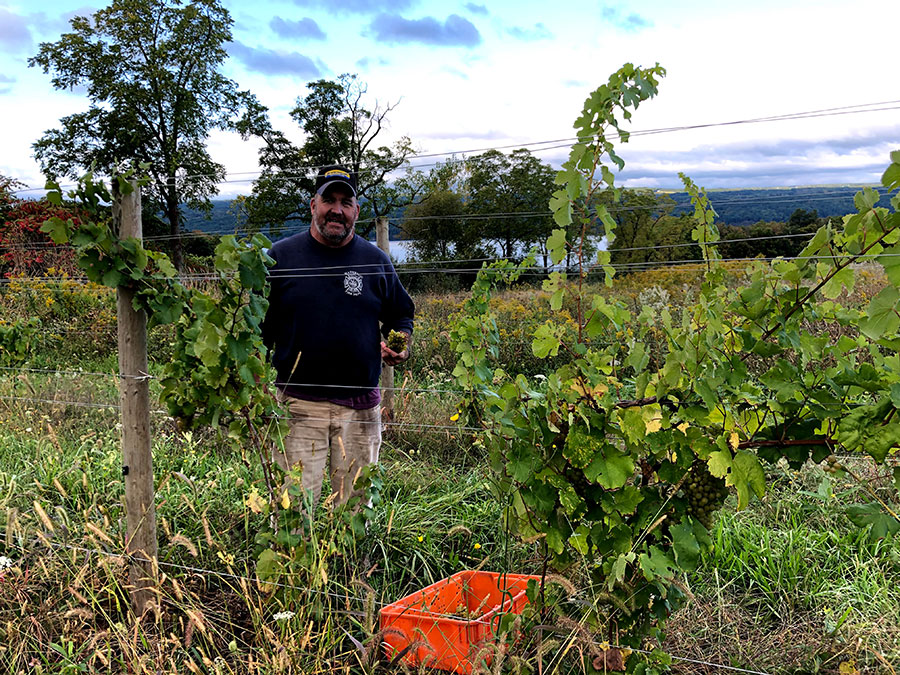 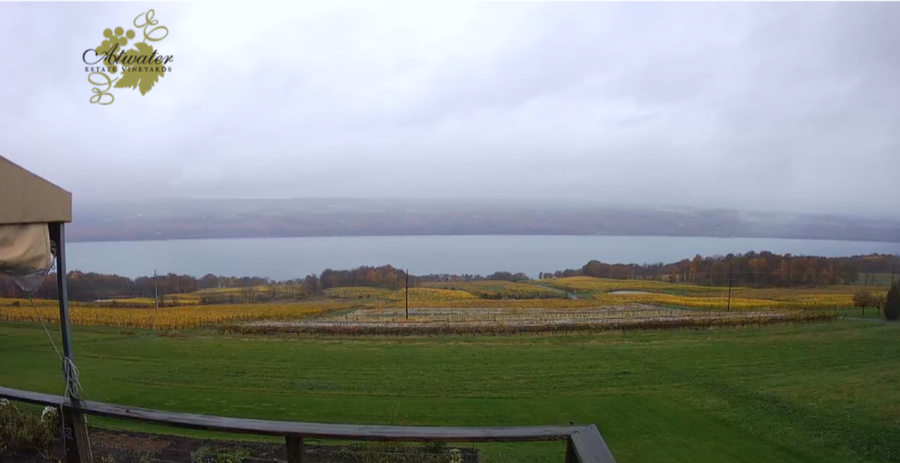 Our harvest season ended on November 5 with late harvest Riesling last off the yellowing autumn vines. Be sure to tune in to our LIVE webcam to watch the vineyard transition from fall to winter. 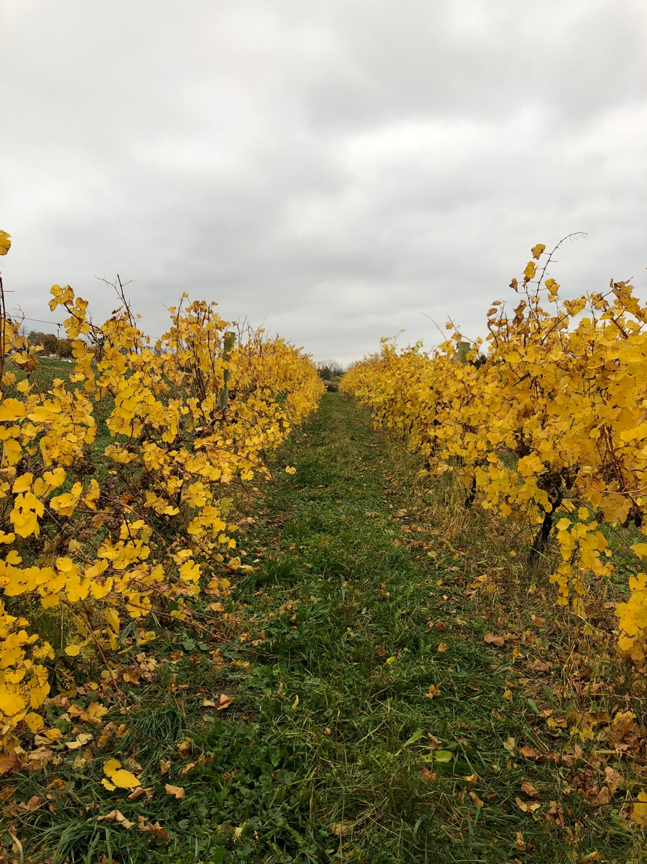 September was generally dry with many warm and sunny days along with cooler nights—ideal ripening weather.

Although we usually have a hard frost by mid-October that causes the leaves to drop from the vines, this year, without such a hard frost, they have been able to send their nutrients from the leaves to the roots on their own time. This process accounts for the yellowing across the vineyard. As harvest season comes to a close, the vineyard crew is shifting to vineyard maintenance. They are removing unproductive or underperforming vineyards to rest and cover crop the soil for a couple of years before replanting with varieties that better suit our site. They are also installing trellis in our new blocks, repairing trellis that was broken throughout the year, and improving trellis setups so that we can manage our canopy better and more efficiently which will help with ripening and disease control. There are also many miles of posts and wires that support the vines that have to be maintained.

We have a short window when there are no grapes on the vines and the ground is not frozen when we can make these repairs and this is a critical time for setting up next year.

Fermentations are proceeding at a good clip in the cellar and while a few Rosés have gone dry, the majority of our whites are still marching along. The last of the red fermentations are winding down and are all now pressed off their skins. Those reds will be making their way into barrels where they will finish both alcoholic and malolactic fermentations before they begin their winter hibernation. The next stage will begin looking at each individual wine to assess whether it needs any corrective intervention. This usually involves a series of blending bench trials to determine how best to finish the wine. 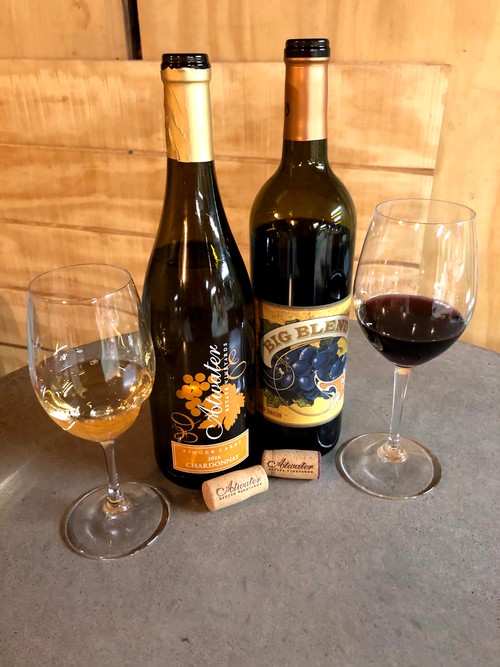 Big Blend 2016
Bright and lean upfront with rich earthy tannins that mingle with raspberry and strawberry notes, the Big Blend 2016 finishes with a lengthy, spicy finish. 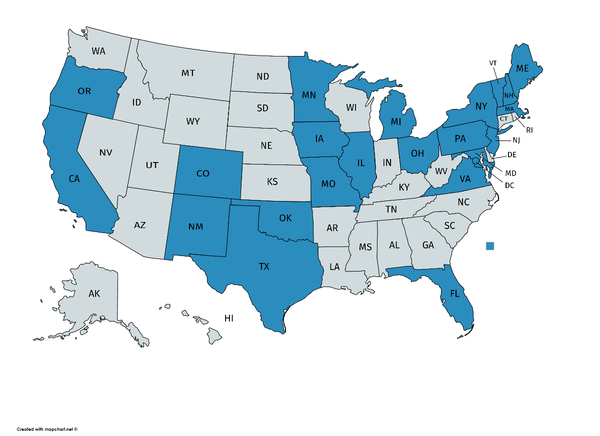 We are happy to announce that we've added two more states to our ship list: Maine and Oklahoma. In 2020, we hope to examine the regulations and licensing fees for additional states. Although we would love to be able to ship directly to every state, each has different laws. Some do not allow wineries to ship to consumers, and some have taxes and licensing fees cost prohibitive for a winery of our size.

Are you curious about wine shipping rules to your state? The website FREE THE GRAPES summarizes state-by-state legislation.

On October 13, wine club members joined us for our annual Hands on Harvest, an immersive experience that teams club members with our harvest crew and winemakers to provide a unique perspective on the winemaking process.

After an orientation with Vineyard Manager Chris King, participants hand-picked Riesling then joined winemaker George Nosis for an introduction to the press deck where they got to sample wine at various stages in the production process. The afternoon closed with a lovely lunch paired with a selection of our wines.

We were thankful for a beautiful day with lovely weather and appreciated our club members who traveled near and far to join us for this special event.

Check Out All of our Upcoming Events